Jaywalking in China and New York City: The Pot Calling the Kettle Black 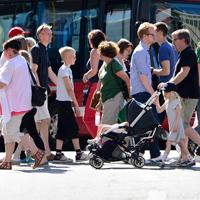 Last month I was standing at an intersection in New York City, but felt like I was back living in my home city of Shanghai. All around me, there were jaywalkers who didn’t appear to have any interest in following the traffic signals, which reminded me of the so-called “Chinese Style Road Crossing.”

The term “Chinese Style Road Crossing” (中国式过马路) was created by a Chinese netizen in 2012, stating that when a large crowd of pedestrians try to cross a road together, there is no need to obey the traffic rules. It is based on an underlying assumption that law enforcement officers would not punish a large number of offenders all at once.

As a common phenomenon in Chinese urban cities, jaywalking has generated a discussion on its causes, consequences and solutions among the general public, mass media, traffic experts, decision-makers and law enforcement agencies. Here are some mainstream ideas:

To help improve pedestrian safety and save lives in China, some experts looked to best practices in the developed countries like the United Kingdom, Japan, Germany and the United States. However, after being in the U.S. myself, I tend to agree with a Chinese correspondent in the United States who maintains that jaywalking in New York City is even worse than in China, because New York City jaywalkers don’t form into a group and jaywalking on your own is much more dangerous.

Another Chinese journalist who frequently travels to New York City considers the New York City “style” of jaywalking to be slightly better than that of China because there is a tacit understanding between drivers and pedestrians that 1) jaywalkers would look left and right before crossing the street and keep an appropriate distance, and 2) drivers would generally let the pedestrians cross the road first at any time. To me, this explanation seems plausible because Chinese drivers and pedestrians tend to favor themselves and thus there is no balanced environment for “safe” jaywalking in China.

As someone who has witnessed both styles of jaywalking, I think it is meaningless to make a judgement between the Chinese and New York City styles of jaywalking, as they are both the pot and the kettle and both put people at risk for injury or death. Worse still, parents who jaywalk put their kids in danger as the children follow their parents and their rules. And of course, jaywalking while using an electronic device is even more dangerous.

According to an observational study conducted by Safe Kids China, 17.8 percent of primary school students do not follow the traffic signals, 13 percent do not use crosswalks and more than half admit to crossing the street while distracted by technology.

It is still an ongoing effort to prevent kids and parents from jaywalking and to make walking to school and home much safer for children. And after being in both places, I can see how important it is whether you live in New York City or 7,300 miles away in Shanghai.

Here are some useful tips:

A Sea of Change for Car Seats in China

A New World of Passenger Safety