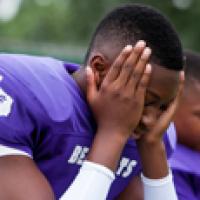 Nine years ago, Zackery Lystedt was a playing football game with his team at Maple Valley Junior High. Zack went back into the game in the fourth quarter after a hard hit in the third. The game ended, his dad, Victor, ran out onto the field to congratulate Zach for a good play. Zack told his dad that his head hurt. Then, he said, he couldn't see, and then Zack collapsed onto the field.

Zack had a second impact concussion and survived only after months in a coma and multiple surgeries at Harborview Medical Center in Seattle, the home of our Safe Kids coalition in the city.

Slowly Zack, his family and a team of supporters slowly traveled the road to Zack's recovery but also took another road on a campaign to pass a law in Washington State. The law defines a protocol for what happens when a young athlete shows signs of a head injury. Named after Zack, the Lystedt law, which has been passed in all 50 states, says that an athlete must be pulled from the game and cannot return until a medical professional with training about concussions says in writing that they are ready to play again. A best practice calls for high school coaches to be educated on how to identify a concussion.

The late Yogi Berra once said, “It’s déjà vu all over again,” and that’s what Friday night, October 2, felt like. Kenney Bui, a defensive back on the Evergreen High School team outside of Seattle received a hard hit to the head in the fourth quarter and was taken to Harborview. But this time, the surgeries couldn’t save him, and Kenney Bui is no longer with us. Bui was the fourth high school player to die for injuries playing football in the last month.

What now? We still have work to do. End football? No. Cancel high school football programs? That’s not the answer, either. Even stronger laws? Maybe.

But passing laws is not always the strategy. It’s my job here at Safe Kids to pass child safety laws, and I’m the first to tell you that laws are only one piece of the puzzle and sometimes the remedy of last resort. To keep Friday night lights on, we must work to change the culture of the game. Coaches, parents, school officials and everyone near the sidelines need to focus on the fun involved in sports, and the values it teaches kids.

Just like they named the Washington State law after Zack, we must dedicate the next sports safety efforts to Kenney Bui and the other kids who died this year. It must be a genuine effort to change the culture of winning at all costs. Helmets were made to preserve heads, not as weapons against the other team. We must teach our young athletes that playing through an injury is not playing smart. We must teach that winning is not only not everything, it's nothing if achieved through mean spirit and empty values. Kenney, we can do this.

The Next Laws, Rules on Kids Sports Safety

If you are interested in learning more about Safe Kids’ sports advocacy and/or want to get involved, write us.

Batter’s Up for Advocacy

The Risky Road When an Injured Young Athlete Takes a Painkiller

Be a Water Watcher