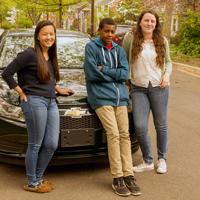 No one starts their day anticipating getting into a car crash. But teens like Presley teach us that it only takes one time riding in a car without bucking up for a life to be changed forever.

"I lost my best friend because we didn't buckle up."

Eight years ago, Presley lost her best friend, Lindsay to a tragic car crash when the pair were driving home from a nearby gas station. It was a rainy fall night and Lindsay hit a curve in the road and lost control of the car. The car ran off the road, crashed into a ditch and flipped several times.

Neither teen was buckled up.

Both girls were thrown from the car and Lindsay died at the scene. Presley sustained multiple fractures to her face and body, remained in a coma for almost a month after the crash, and is still battling a severe brain injury.

In memory of Lindsay, Presley makes it her mission to speak out to other teens about the importance of buckling up on every ride. "I almost always buckled up, but we were just going around the corner, so we let it slide," said Presley. "Every time I think of Lindsay, I wish we had taken that extra moment to buckle up."

With kids celebrating the start of summer break and many teen drivers and passengers on the road, we've teamed up with the General Motors Foundation to release some new research about teens in cars.

Did you know more teens die in motor vehicle crashes than from any other cause? We spoke with 1,000 teens to better understand why and find out how to keep teens safe on the road.

Our survey looked at why teens don't always buckle up and how often they text or talk on the phone while driving. We also asked what teens do when they feel unsafe in a car. Read the surprising results in our research report.

One in four teens surveyed say they don't use a seatbelt on every ride. What are some of the top reasons why? Check out our infographic to learn more. 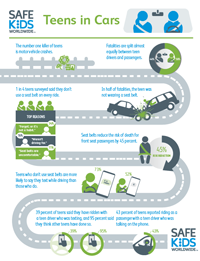 What Teens Have to Say

We talked with teens about what it's like to ride with teen drivers. Here's what they told us.

On riding with teen drivers

On speaking up when they feel unsafe

On the role of parents

We want parents and teens to remember three things while riding in cars: buckle up, phones down, speak up.