Why I Love Safety Cameras 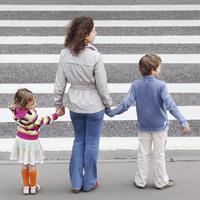 Update: We’re thrilled to report that on June 3rd Governor Hickenlooper vetoed the bills that would have turned safety cameras off in Boulder, Greenwood Village and other towns and cities in Colorado. Thank you to all of you who joined us in taking action to urge the Governor to keep kids safe on Colorado streets!

Last week, my husband and I received a ticket in the mail. We'd been caught by a speed camera about 1/2 a mile from our home.

I'm so glad I got this ticket. Seriously. And here's why.

The speed camera that caught me is located about 20 feet from a cross walk that I use several times a week to cross a very busy street.

Typically when I'm in the cross walk, I'm carrying my 5-month-old daughter, Beau, who attends a nearby daycare. I'm often accompanied by my 5-year-old son, Winston.

We watch the cars whiz by. After a few seconds I start waving my free hand, hoping to signal a sympathetic driver that, yes, there are pedestrians in the crosswalk and yes, they need to stop.

It typically takes a while. The drivers are usually going more than 40 miles an hour in a 25 MPH zone. By the time they see us, it’s too late to slow their cars down and abide by the law that pedestrians have the right of way when in a crosswalk.

I worry – and am fearful – every time I approach this crosswalk.

But now, with the speed camera, drivers will have an added incentive to slow down and hopefully be more aware of pedestrians crossing the street. I know speed cameras and red light cameras, collectively called safety cameras, are controversial – no one likes to get caught breaking the law, and we definitely don't like paying fines. I certainly have other things I’d rather do with the $40 I will have to pay.

But these technologies work. They help to make us better drivers. We drive more slowly and avoid running red lights. When we do these things, the rate of car crashes drop dramatically and lives are saved. Look what happens:

It concerns me and my colleagues here at Safe Kids, as well as our partners at NHTSA and the National Coalition for Safer Roads, that there are some communities fighting implementation of safety cameras. We’re also concerned of cases where municipalities are seeking to reverse existing legislation that allows this technology to be used to protect both drivers and pedestrians.

For example, citizens in Boulder, Greenwood Village and other towns and cities in Colorado lobbied their legislature to send CO Governor John Hickenlooper bills to turn safety cameras off. We urged the governor to veto this legislation as it will make the streets less safe for children.

You can join us by tweeting Governor Hickenlooper, @hickforco, or sending an email to urge him to veto the bills that would make Colorado streets less safe. It would also send a message to other communities where the safety cameras are being shut down like Houston and Albuquerque.

The new speed camera in my neighborhood has only been in place for about six weeks, but I'm hopeful that it will eventually slow traffic down and make our busy intersection a bit safer for our community.

In the meantime, the ticket I got from that camera has made me a more cautious driver, and kids and all pedestrians will be safer because of it. Just might be the best $40 I ever spent.

Teens on the Move: Why are so Many Teens Getting Hit by Cars?

Why I Love the World Cup