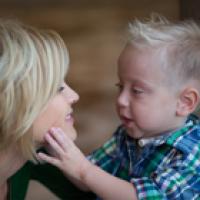 It was a Saturday, and we were planning to celebrate Ethan's third and Emmett's first birthday with friends and family. While pulling Emmett out of his crib, I noticed that his little body was burning up. It seemed more serious than a normal fever, so Michael took him to a local Pediatric Urgent Care facility. An hour and a half late to his own first birthday party, Emmett returned home. The doctor said he had a common cold or flu virus.

The next two days, Emmett's symptoms became worse and worse by the hour. He had no desire to eat; he screamed any time I tried to get him to eat even a spoonful of food. He contracted a horrible cough that was followed by a great deal of mucus. He wanted nothing but to be held, and as parents we felt completely helpless.

First thing Tuesday morning I drove Emmett to his pediatrician’s office. On our way to the appointment, he started vomiting up blood. I was terrified. The pediatrician suspected a severe respiratory infection and immediately sent us to a nearby Emergency Department. The emergency room doctor administered a few breathing treatments and then took an x-ray. When I saw the x-ray image, my heart was struck with fear. What was in my child's throat?

The attending physician came into the room with concern and alarm written all over her face. She confirmed my fears; Emmett had a button battery lodged in his tiny throat. The battery was lodged in his esophagus very close to his fragile heart.

To this day, I don’t remember seeing Emmett choking on anything. I kept thinking, "Where did he even get this battery?" (We later realized it was from the remote control to our DVD player. I never thought twice about allowing my children to play with remote controls. They seemed to be fascinated with the buttons.)

Within 10 minutes of receiving this devastating news, Emmett and I were in an ambulance on our way to Phoenix Children's Hospital. Once we arrived, Emmett was immediately rushed into the operating room. A pediatric surgeon, Dr. Craig Egan, removed the tarnished and eroded battery from Emmett's esophagus. But that was only the beginning of a long and, at times, seemingly endless nightmare.

Emmett was in extreme critical condition. For a week and a half, physicians were unsure whether or not he would survive due to the damage that the tiny battery had done to his body.

Over two years after Emmett swallowed the button battery, he is still dealing with major and critical complications requiring a second opinion from a hospital out of state. Emmett has endured 30-plus surgeries, spent eight months in a pediatric ICU and has recently had his entire esophagus removed and replaced with a portion of his bowels at Cincinnati Children's Hospital.

Although Emmett has a new functioning esophagus, he is still dependent on a gastrostomy tube (G/J-tube) placed in his abdomen to give him the nutrients his body needs. He will require months and even possibly years of swallow therapy to be able to completely eat by mouth. Emmett also requires a trach to breathe and will require another complicated operation to reconstruct his airway. He will continue to deal with many lifelong medical complications.

Each and every day, Emmett continues to fight. We are so blessed to have him here with us today.

But Emmett is not alone. According to the National Poison Control, 3,500 children each year suffer from this sort of accident. Eleven deaths have been reported.

That’s why I want to share our story. To help other parents learn about button batteries and how to prevent similar tragedies.

My family is so grateful to have our son here with us today. Emmett’s big toothy grin and infectious smile brings us pure joy. He is the toughest kid I know. The fact that he is poked and prodded constantly, but endures it all with a smile, even when he is in incredible pain, is truly inspiring to me.

Jacob’s Story: We All Have the Power to Prevent a Tragedy

From Car Crash to Firefighter: The Incredible Story of Brooke Ice